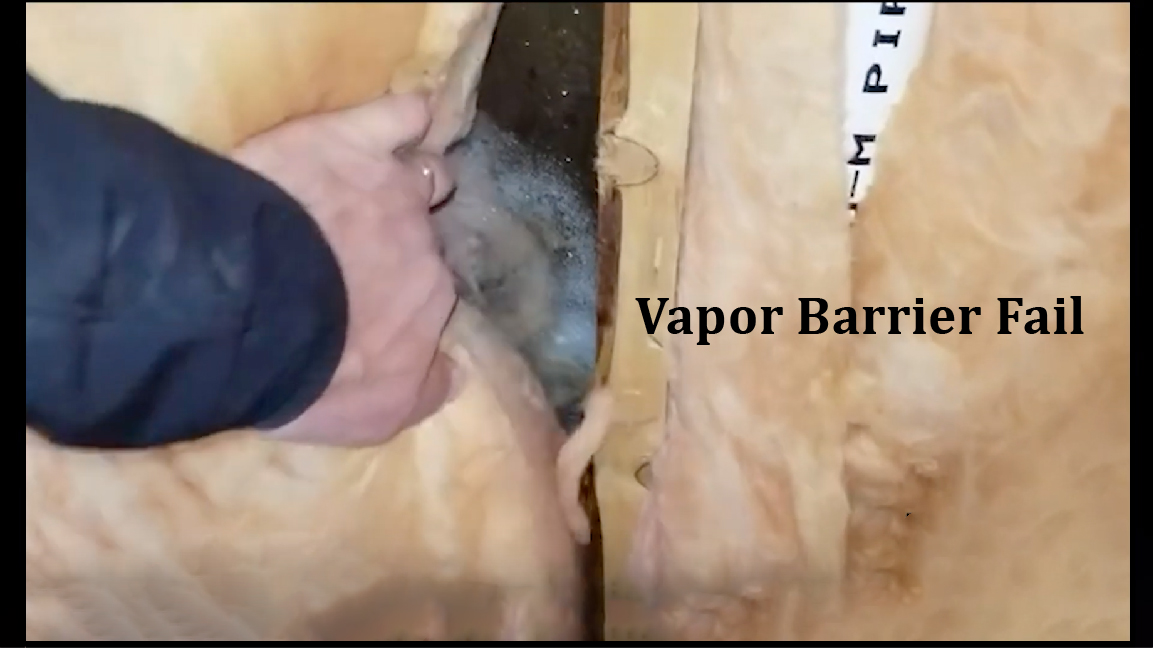 I see it all the time when inspecting newer homes. Builders will complete the upper levels of the home and basement spaces are left for the new owner to finish as time and funds permit. Typically, any part of the basement that is above grade level is constructed with wood framed walls. The wall cavity is then insulated and a poly vapor barrier is installed.

The purpose of those basement vapor barriers is to prevent condensation from forming in the wall cavity when warm, moisture laden, interior air comes in to contact with the cold wall surface at the exterior of the home. For a vapor barrier to do its job, first it needs to be present and second it needs to be airtight. In the video above, the homeowner had made the mistake of simply removing the vapor barrier for whatever reason (as a home inspector, I stopped trying to figure out the intentions of homeowners a long time ago). The result was condensation and frost buildup at both the wall sheathing and insulation. Left unchecked, the long term effect of this oversight is going to be moisture damaged components and the likely growth of mold in the wall cavity.

Just as important, when a vapor barrier is present, it needs to be sealed airtight to be effective. It should be caulked at the top and bottom plates of the framing and around all window and door openings in the wall. Overlapping seams in the poly should be sealed with tape and any tears or perforations in the poly should be taped as well. Think about how and where air can pass through the vapor barrier. If air can find its way in, the moisture that it carries will also find its way in to the wall. Seal it tight, and that moisture remains inside the home as part of the home’s interior ambient air.

A final word on maintaining vapor barriers: I doubt most builders expect unfinished basement spaces to remain unfinished for fifteen years or more after construction. That airtight poly that was installed when the home was constructed just isn’t designed to hold up for that long unprotected. Life just happens in our homes. Sometimes roughly. To protect a vapor barrier and keep it airtight, I encourage drywall to be installed as soon as possible. Even if there are no plans to fully finish the basement for some time, having drywall temporarily installed will protect the vapor barrier and ensure it stays airtight, preventing both moisture related damage to wall components and mold growth in the wall.